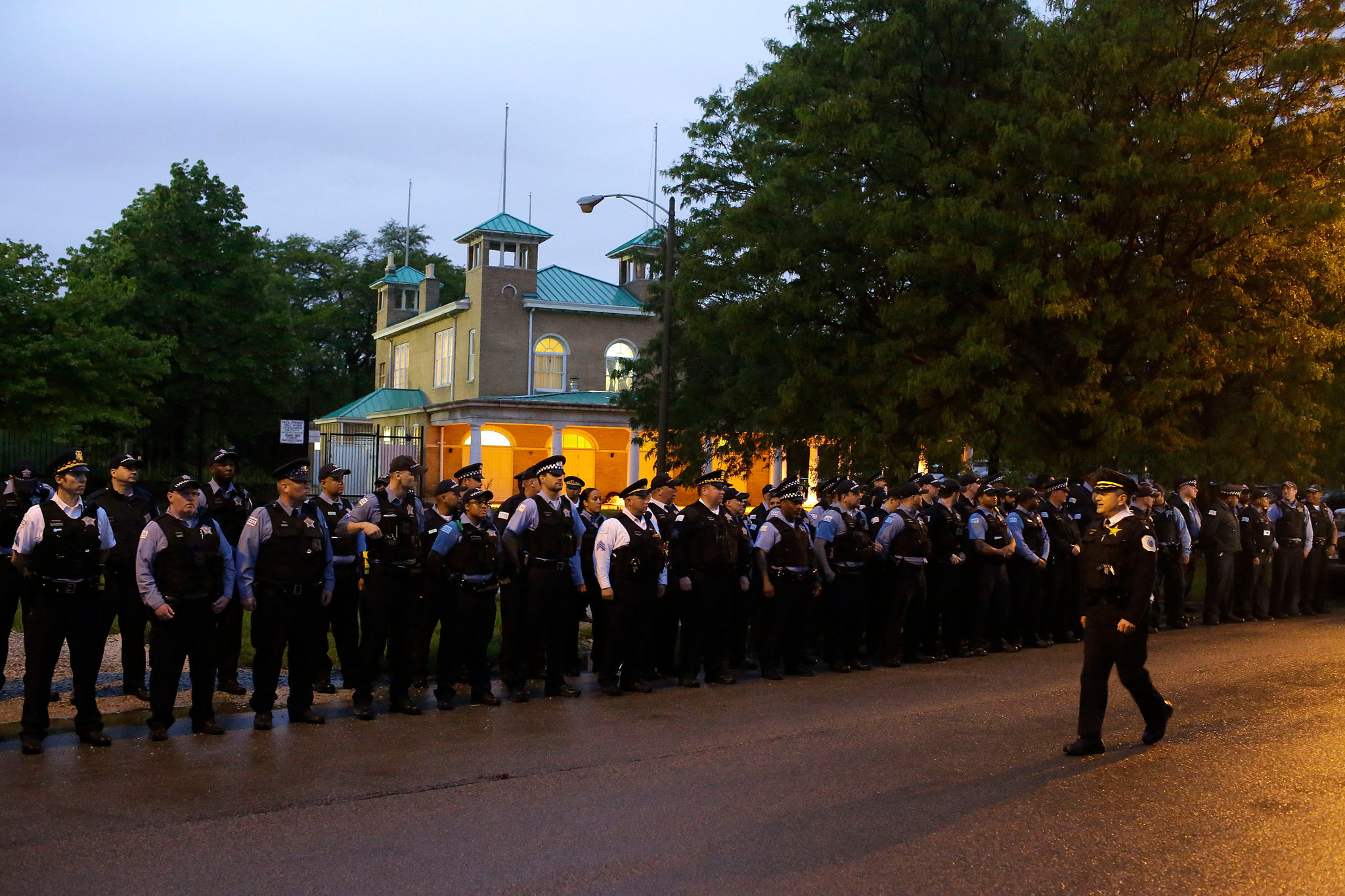 Chicago police officers attended an outdoor roll call last month at the city’s Washington Park. A lawsuit is critical of the way the police treat blacks and Hispanics.(Credit Joshua Lott for The New York Times)

Hoping to step into the breach left by the end of the Obama administration’s aggressive approach to civil rights abuses by the police, a coalition of civil rights groups filed a federal lawsuit against the City of Chicago on Wednesday.

The lawsuit, which seeks sweeping changes to a police force with a well-documented pattern of excessive force and other misconduct, comes five months after Mayor Rahm Emanuel pledged to cooperate with the Justice Department to implement a police reform plan supervised by the federal courts.

But the change at the White House cooled the federal appetite to intervene in police departments, and critics say Mr. Emanuel has been all too happy to negotiate a less stringent deal.

The lawsuit, filed Wednesday, is the latest chapter in the city’s long-running saga over how its Police Department treats the blacks and Hispanics that each comprise about a third of its population. It catalogs episodes of controversial police use of force dating back to the 1960s.

Without federal court oversight, the plaintiffs contend, little will change in a city that has perennially faced racially tinged police-abuse scandals.

“It is clear that federal court intervention is essential to end the historical and ongoing pattern and practice of excessive force by police officers in Chicago,” the lawsuit states. “Absent federal court supervision, nothing will improve.”

But Police Superintendent Eddie Johnson said the city was already pursuing meaningful reforms. “We will not waver from this path,” he said.

For most of last year it had seemed all but certain that the Justice Department would seek extensive court-ordered reforms through a federal “consent decree,” and that Chicago might have little room to object.

In January, the Justice Department issued a blistering report that documented abuses and racial disparities.

The city “promotes a culture of rampant brutality, especially against people of color,” the lawsuit said, adding that the police are 14 times more likely to use force against black men between the ages of 20 and 34 than against their white counterparts.

The most recent crisis was spurred by the release, a year and a half ago, of a video showing a white officer shooting a black teenager 16 times.

The video contradicted the police accounts of the death, which claimed the teenager had been moving menacingly toward them with a knife.

A mayoral task force formed in the aftermath of that scandal later reported that the city’s own data “gives validity to the widely held belief the police have no regard for the sanctity of life when it comes to people of color.”

But the prospect of a consent decree faded after the election of President Trump, which led to the appointment of Attorney General Jeff Sessions, who has long criticized such arrangements, even calling them “dangerous” because they circumvent the will of voters.

Since he took office, Mr. Sessions has also ordered a sweeping review of federal police interventions, declaring that “the individual misdeeds of bad actors should not impugn” the work police officers perform “in keeping American communities safe.”

But private plaintiffs can also seek a court-enforced settlement. The new lawsuit essentially seeks to persuade a federal judge to order changes similar to what might have occurred under a federal consent decree with the Justice Department.

“An independent monitoring team that reflects the diversity of Chicago’s communities” would oversee the department’s compliance and make regular reports to the court.

The reforms sought in the lawsuit include using police force only when necessary, ending the “code of silence” that has long meant that officers keep quiet about wrongdoing, improving training and supervision, ensuring that police are accountable to the community, and eliminating severe racial disparities in how police operate.

The lawsuit, whose plaintiffs include Black Lives Matter, also seeks monetary damages for individual plaintiffs who say they have suffered police abuse.

Chicago officials say they have taken steps toward reforms, including a revised use-of-force policy. But the plaintiffs say changes have been superficial and “have failed to ameliorate conditions on the ground for those subjected on a daily basis to police abuse.”

The city recently proposed a deal with the Justice Department for an independent monitor that would not be overseen by the courts. But critics said the agreement would be toothless.

After the lawsuit was filed Wednesday, the city’s corporation counsel, Ed Siskel, said the city agreed that reforms were necessary, and he criticized the Department of Justice for not following through “with their commitment to a consent decree.”

“The substance of the reforms that we are all trying to achieve is not really in question,” Mr. Siskel said. “It is matters of process that we are discussing.”

He added: “What is not in any doubt is that the road we are on and committed to is a road towards real and lasting, sustainable reform in the police department, and we are not getting off that road.”

But Craig B. Futterman, a University of Chicago law professor who is one of the lawyers representing the plaintiffs in the lawsuit, said if the city really was willing to follow through on its pledge to negotiate a federal consent decree, the new lawsuit gave them that opportunity.